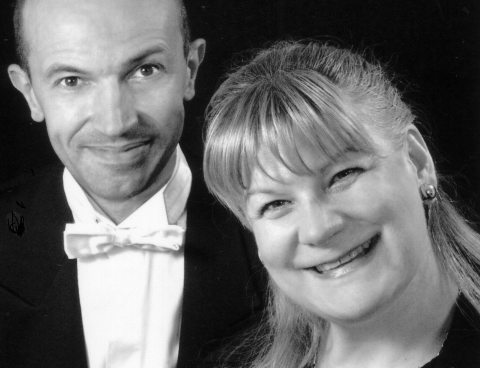 TIZIANA MONETA and GABRIELE ROTA, who recently celebrated thirty five years of artistic collaboration, have made a name for themselves in both public and critical opinion and have become successful as one of the most interesting formations today, internationally renowned for their versatility in the works for piano duet and for two pianos. The two musicians, raised in the school of Carlo Pestalozza, Nikita Magaloff, Jörg Demus, Ilonka Deckers and Aldo Ciccolini for piano and Vittorio Fellegara for composition, have a repertoire which ranges from the classics to contemporary music and which comprises either original works or composers’ versions of chamber and orchestral works. In this way, they are making a decisive contribution to renewing interest in this particular area. They are regular guests at most prestigious concert halls in Italy; they have also made several tours in Germany, Hungary, England, Croatia, Portugal, Poland, Rumania, Spain, Russia, Ukraine and Turkey, often broadcast live by national radio stations. They have performed brand new pieces in major Festivals both in Italy and abroad and give lectures and master classes.
Among their several recordings, world premieres by Respighi and Brahms are to be remembered, as well as the complete production for piano duo by Debussy, Ravel and Dvořák, the Concerto for two pianos in A flat by Mendelssohn and works by Schubert, Schumann, Stravinsky and the most important Italian composers. On the occasion of the thirtieth anniversary of their artistic collaboration, a new CD, completely devoted to music by Mendelssohn, was published for the label La Bottega Discantica and was presented with great success in Milan, Turin, Modena and Bergamo. A new CD dedicated to Russian music (Shéhérazade by Rimsky-Korsakov and Nutcracker Suite by Tchaikovsky) was recently issued.