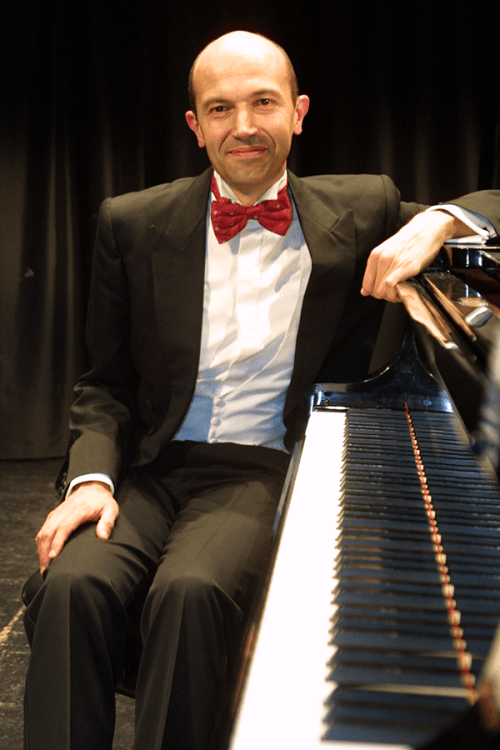 Since 1986 Gabriele Rota has been forming with Tiziana Moneta a piano duo which is internationally renowned as one of the most interesting formations and is regular guest of the most prestigious Italian European concert halls. In Duo, Gabriele Rota has recorded several CDs including, among others, the world premiere recording of Respighi and Brahms works, the complete works for piano Duo by Debussy, Ravel and Dvořák, and many world premieres, espressly written by important Italian composers.

The Bergamasque pianist carries out an intense chamber activity with other musicians. In 2011 he started a collaboration with the flutist Antonella Bini which has brought the two artists to perform in numerous Festivals, also live on radio, in a repertoire ranging from classical to contemporary, often with compositions specifically dedicated by eminent authors.

With clarinettist Rocco Parisi he has recorded several CDs dedicated to Italian Twentieth Century music and to rarities and transcriptions; lately a disc of chamber music by Nino Rota is in preparation. The interpretation of Ennio Morricone’s works by Parisi and Rota was much appreciated by the composer himself, who praised “the fine performance, very heartfelt and sensitive.”

Gabriele Rota is also protagonist of solo recitals in Italy and abroad; he often performs with the participation of actors (Sonia Grandis, Enzo Guerini and Gabriele Laterza  among others) for reading of poems, with music by Schubert, Chopin, Brahms, Debussy and his own creations. He is a permanent member of the ACHROME Ensemble, dedicated to the dissemination of the twentieth century and contemporary repertoire in Italy and abroad.

Since 2004 he is secretary of the Italian Society of Contemporary Music (SIMC), a position which was held for a log time by Vittorio Fellegara. Gabriele Rota’s compositions have been performed in Italy and abroad and published by Bèrben. The magazine Seicorde has chosen his “Nocturne and Divertissement” for voice and guitar as “Score of the month.”

Gabriele Rota usually gives lectures on music; in 2008 he participated in the International Convention “Giacomo Puccini 1858-2008” (promoted by the National Committee for Puccini celebrations), which took place in Lucca and Milan.

After teaching in conservatories of Bari, Brescia and Vicenza, Gabriele Rota is currently chair holder of Score Reading at the “G. Verdi” Conservatory in Milan.